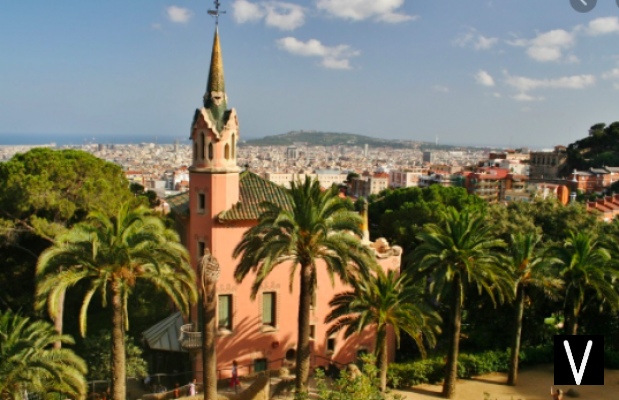 The Gaudí house museum was the architect's residence from 1906 until 1925.

The house preserves furniture and objects designed by the architect, as well as a collection of personal effects that allow a better understanding of Gaudí's life and mentality.

The house was built within the Parc Güell, with the original intent of showing potential buyers of the park plots an example of what Gaudí and Güell had in mind for their Parc Güell urbanization project. Compared to what is commonly thought, the house was not designed by Gaudí.

Students, children between 11 and 17 years old, pensioners, holders of the Barcelona Card or the Ruta del Modernisme Card are entitled to reduced admission, of 4,50 euros.

Children up to 10 years old and people with a handicap over 65% are entitled to free admission.

Since the Casa Gaudí is located inside the Parc Güell, it is necessary to enter the park. However, it is not necessary to buy a ticket for Park Güell, as the house is in the free access area.

History of the Gaudí House

During the construction of Parc Güell, Count Eusebi Güell allowed the builder to build an example house for potential buyers.

The task was carried out by the architect Francesc Berenguer i Mestres, who, not being an architect yet, had the project signed by Gaudí himself. The plot chosen for the construction was one of the best, with a wonderful view over the city and located near the main entrances.


The house, built on sloping ground, is built on three floors plus a basement, with a tower at the top. The chimneys and the roof of the tower are built in Trencadís, ceramic tiles characteristic of Catalan modernism.

Gaudí moved into the house in 1906, together with his father Francesc and his niece, Rosa Egea i Gaudí. His father died in October of the same year, while his niece died in 1912. Gaudí continued to live in the house for over 20 years, until 1925, when he moved to the construction site of the Sagrada Familia.

After Gaudí's death in 1926, the house was put up for sale and bought by the Italian merchant Francesco Chiappo Arietti, who moved immediately. By the will of Gaudí, the proceeds of the sale were spent on the construction of the Sagrada Familia, while his personal belongings were dispersed. The merchant left the house practically as it was, as he was an admirer of the Catalan architect.

When the couple died, the heirs sold the house again to some friends of Gaudí, who wanted to make the house a space accessible to the public, bringing various objects from the architect.

The collection includes various pieces of furniture that come from other Gaudí projects, such as the Batlló house and the Milá house, personal objects of the architect, arranged on the two accessible floors of the house.