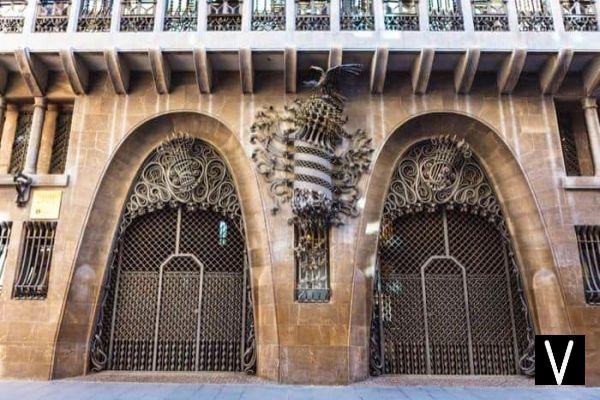 The Palau Güell was the first major work of Antoni Gaudí to Barcelona.

Eusebi Güell, after having appreciated the work of Gaudí at the Universal Exhibition in Paris in 1878, gave the young architect the commission to build this particular urban palace, as an extension of the family house he owned, in the Rambla in Barcelona.

The result is a magnificent example of themodernist architecture: adapted to the local context of the Gothic Quarter.

Gaudí designed a building functional to the private needs of the family, and to the intense social life that the client intended to have.

With the palace project, Gaudí expressed his ideas on the management of space and light, with the application of very peculiar solutions to obtain efficient results. In addition to this, the architect gave life to his vivid imagination, using traditional materials in an innovative way, such as stone, iron, wood, ceramic and glass, to obtain absolutely original expressive forms.

The palace was declared a historic-artistic monument of national interest in Spain in 1969 and UNESCO World Heritage Site in 1984. The building, despite being a youthful work of the Catalan architect, already contains all the typical traits of his ideas, subsequently applied with greater impetus in his other projects, such as Casa Milá, Casa Batlló, up to his masterpiece, the Sagrada Familia.

Exterior of the Palau Güell

The main facade stands out for its two large parabolic arches entrance, a type of arch that Gaudí will successfully use in his other constructions, closed by a pair of wrought iron gates, a material also used for the window grilles and for the great Catalonian shield between the two arches.

Built in stone, the facade is divided into three levels, interrupted on the right side to give continuity with the neighboring building. On the main floor, on the second level, you can see the long series of wrought iron windows. 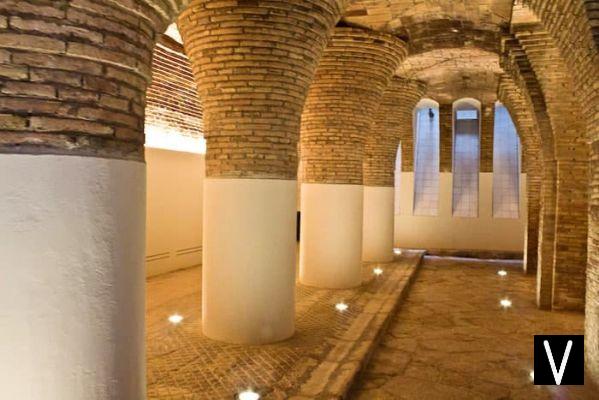 The ground floor and the basement

The ground floor is a space that integrates the concierge services with that for the building remodeling.

Specifically, in the ground floor there is the coach house, the old warehouse for agricultural products, the porter's house, with a cabin from which one could see the entrance and an exclusive staircase for the access of the servants to the upper floors. Between the two rooms is the main staircase leading to the upper floor.

The shed was the space where the carriages and wagons could be left, while the horses could descend into the basement via a spiral ramp.

The floor of the garage is made of wood: a solution designed to dampen the noise of carts and horses. The basement served as a stable, and was equipped with a well, a cistern for collecting rainwater, and spaces for storing straw and wood. The columns and the cross vault are the work of Gaudí, who conceived an efficient ventilation system by adding a small internal patio, able to guarantee the necessary air exchange in the room.

The mezzanine floor of Palau Güell was conceived as an office space. Inside you can find the commercial office of Eusebi Güell and other spaces for administration, as well as the palace's private library. On the other side, there is the main vestibule, through which it was possible to access the real house, via a sumptuous stone staircase. The marble walls and luxurious finishes complete the picture, offering an idea of ​​the wealth of the Güell family. 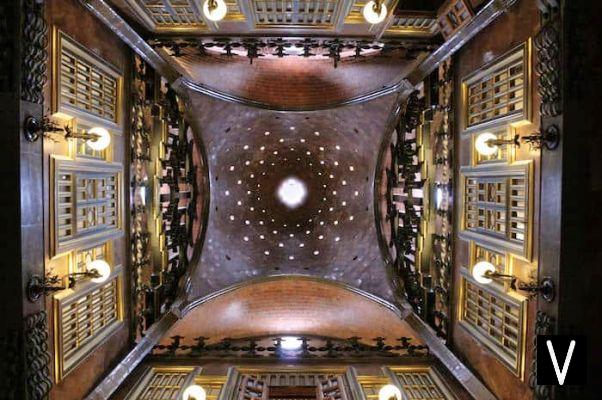 Dome of the central hall

Entering the main floor, the building takes the dimensions of a real palace. The interior spaces are distributed around the central hall, the most important room.

From the antechamber you pass to the corridor where visitors passed to access the central hall. One side of the corridor is open to the street, through a series of windows, able to let in a lot of light and give an idea of ​​airiness to the environment.

The space is divided by a series of columns, surmounted by parabolic arches, able to separate the rooms without dividing them completely.

The corridor ends in the visitor room, the space where visitors waited before entering the central hall. The roof of the hall is worked with noble woods and wrought iron, adorned with gold leaves. Also noteworthy are the stained glass windows, decorated with Shakespearean characters.

The central hall is the real protagonist of the building: its roof consists of a parabolic dome, which illuminates the entire room through small windows and a large central oculus. Starting from an original and intelligent solution, the hall constitutes the central axis around which the entire space of the building is arranged, forming an organic whole even with the upper floors.

The hall is lavishly decorated with wood and marble, has both a tablero (an altar covered with wood panels), and an organ, carefully positioned for the performance of concerts in the hall.

Behind the central hall is another smaller room, suitable for meetings and social life with closest friends. This room, also called the sala de fumadores, was a quiet corner for passing time and reading. The room is separated from the dining room by a Mudejar-inspired wrought iron and wooden gate. The billiard room completes the main floor, an intimate space with an original pool table of the time.

The mezzanine was designed to accommodate musicians for concerts, in a space created between the noble and private floors, opening onto the central hall. In ancient times, the main kitchen of the Palau Güell was located on this floor, as well as other dependencies for the servants.

The private floor was the real home of the Güell family, with the space always organized around the central hall. On the floor there were the double rooms of the Güell spouses, as well as the children's rooms, bathrooms and other service areas. Every detail was meticulously studied by Gaudí, who also made the interior furniture: a part of this is exhibited in the Casa Museo Gaudí, located inside the Parc Güell.

The attic and the terrace

In ancient times all the housework was carried out in the attic, with a laundry and a kitchen, and all the service staff lived, arranged in 11 dormitories separated by wooden partitions, now removed.

The roof terrace is one of the most spectacular spaces in Palau Güell, with its 20 chimneys and the central dome, 15 meters high. Gaudí converted the chimneys into real sculptures, with bases, trunks and capitals with unusual shapes. In the middle of the terrace is the dome of the central hall, ingeniously covered with filler material.

How to get to Palau Güell

Carrer nou de la Rambla, a crossroads of the Rambla on the side of the Raval.

The closest metro stops are Liceu (line 4) and Drassanes (line 3).

From Liceu, go down the Rambla along the sea and turn right after about 300 meters, the Palau Güell is the second building on the left.

During the rest of the year it closes at 17:30 pm. The Palau Güell is closed on Mondays except public holidays, December 25th and 26th, January 1st and 6th, and from January 18th to 24th due to roadworks

General admission costs 12 euros; children under 18, those over 65 and holders of the modernisme card route are entitled to a reduced admission of 9 euros.

Children aged 10 to 17 pay 5 euros, while those under 10 are entitled to free admission. On the first Sunday of each month, admission is free for everyone, as well as on 12 February, 23 April, 11 and 24 September.