Parc Güell: tickets and how to get there 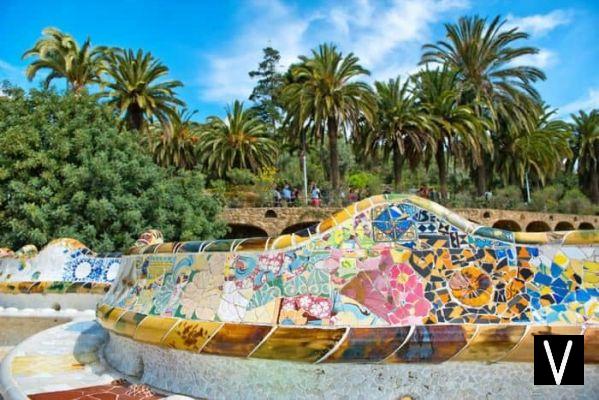 Il Parc Güell is one of the main attractions of Barcelona. Located just north of the Gràcia district, it is difficult to define it simply as a park, those who visit it for the first time might think that it is the representation of a dreamlike vision, the work of the brilliant Catalan architect Antoni Gaudí.

The main entrance (located in Carrer de Olot) is easily recognizable from the two porters with the characteristic twisted pinnacles, currently used as a museum, which offer a reconstruction of the history of the park, modernism in Barcelona and the main construction techniques used by Gaudì.

La stairway of the dragon (with his famous salamandra, now one of the symbols of Barcelona), leads up to the sala ipostila (also known as the Doric temple), a space originally conceived as a covered market, supported by 88 columns, some of which slightly leaning to create the impression of being in the middle of a forest. It is likely that Gaudí, for the construction of the hypostyle, was inspired by the church-mosque of Córdoba.

Above the hall is the piazza della Natura, formerly called Greek theatre, distinguished by the Bank of Trencadís, a long perimeter bench lined with ceramic pieces in Gaudí's style, although it was made by one of his collaborators.

This long bench also performs the function of collecting rainwater: the water is filtered by a layer of rock and sand and flows under the colonnade to be collected in an underground cistern. The square, with its panoramic view of the city, is one of the most iconic areas to visit and photograph.

From the square, following the main avenue along the left, you can reach the porch of the washerwoman, maybe the best example of what Gaudí meant by naturalist architecture or organic: the arcade has a wave shape, with the columns of the buttress suitably bent so as to give the impression of being below the waves.

To the right of the square instead, you can reach the Gaudí House Museum, with its characteristic turret, where the architect lived for 20 years (access to the house is not included in the ticket for the monumental area, but is part of the Sagrada Familia circuit).

Inside, a private collection is presented which brings together numerous objects and furniture designed by the Catalan architect, and which allows us to understand the most intimate aspects of Gaudí. Gaudí's house is not inside the monumental area, so those who wish can enter for free from one of the free entrances and reach the house independently.

From Gaudí's house you can easily get to the garden of Austria: it is a collection of plants that was donated by this country to Barcelona, ​​on the occasion of an exhibition in 1977. From the garden it is possible to enjoy an excellent view of the city below. From one of the main avenues of the square you can take a complete tour of the park, returning to the main square on the other side. Along the way it is possible to admire bridges and roads designed by the famous architect, who also took care of the arrangement of the trees, which still follow its original pattern.

Like many other tourist-filled places in Barcelona, ​​Parc Güell is also a popular destination for pickpockets: be careful even inside the park, especially to people who ask you for information or to take a photo.

Access to the monumental area of ​​the park, free until 2013, is today subject to the purchase of a ticket:

There are discounts for those who buy tickets online:

Park Güell is open every day of the year, at the following times:

How to get to Park Güell

The main access to Parc Güell is on Carrer Olot, a 15-minute walk from the Lesseps or Vallcarca metro stops (both on line 3).

Once you arrive at the metro stops just follow the signs along the road.

Alternatively buses of lines 24 and 92 stop directly in front of the main entrance.

It is also possible to arrive with the tourist bus taking the blue line and getting off at the Parc Güell stop.

The main entrance is a 10-minute walk from both stops.

Parc Güell was born in 1900 when the count Eusebi Güell bought a large piece of land, located on a hill just outside the Barcelona of the time. His idea was to make it an exclusive village for wealthy families, providing for the construction of 60 houses surrounded by greenery.

In 1906 Gaudí went to live inside the park, in what later became known as Gaudí House, in the company of his father and a niece; the following year, in 1907, it was the count who moved his habitual residence within the park to a stately home that already existed at the time of purchase.

The urbanization project was a commercial flop and was abandoned in 1914, having been sold up to that moment only two plots: one to Gaudí and the other to the lawyer Martí Trias i Domènech, a friend of the architect.

The distance from the city and the restrictive urban planning rules within the park strongly influenced the sales trend. However, the structures created by Gaudí had some success from the beginning, the square and the hypostyle hall were frequently sold for public events, so much so that the park soon appeared in the Barcelona tourist guides of the time.

Eusebi Güell died in his house inside the park in 1918, and his heirs offered the entire property to the municipality of Barcelona, ​​who bought it in 1922 and made it a public park in 1926.

The ancient stately home of the count is currently used as an elementary school, while the only other house built inside the park is not accessible to the public.

Audio Video Parc Güell: tickets and how to get there
The House of Silk ❯

add a comment of Parc Güell: tickets and how to get there