The Barcelona History Museum, known as Muhba (from the Catalan museu d'història de Barcelona) is a museum complex focusing on the history of the city of Barcelona, ​​which manages several monuments and historic buildings scattered around the city, with its main office in the Plaça del Rei complex, in the barri gòtic. Other secondary structures, always scattered in the barri gòtic, or in the other districts of the city, were subsequently included under the responsibility of the museum, offering a broad insight into the millennial history of the city of Barcelona.

The monumental complex of Plaça del Rei is the most important core of the MUHBA, since its creation in 1943. The museum was born following the transfer of Casa Padellàs, which took place in 1931, when, with the reason for the opening of the Via Laietana, it was decided to dismantle and rebuild the ancient building stone by stone, from Carrer Mercaders up to Plaça del Rei.

The reconstruction works of the palace in Plaça del Rei made it possible to discover important remains of the ancient Roman Barcino, and gave rise to an ambitious archaeological intervention in the square. This finding, together with the rehabilitation of the Tinell Hall (occupied until 1936 by the nuns of the convent of Santa Agata) made it possible to have a unique opportunity to build the museum.

The medieval buildings of the Palacio Real, the chapel of Santa Agata and the gothic palace of Casa Padellàs complete the historical picture up to more recent times. Temporary exhibitions are held inside Casa Padellàs.

Near the cathedral of Santa Eulalia inaugurated in March 2015, the center of The Call is the best starting point to discover how the Jewish community of Barcelona lived during the medieval era. El Call is the name of the ancient Jewish quarter of Barcelona, ​​a sign of a long presence in the ciudad condal, with a very active role in the urban community of the Middle Ages.

The very structure of the district preserves the same layout of the streets, and there is still a large amount of documentation in the city archives. The museum is housed in the ancient home of Yusef Bonhiac, a weaver, with a historical-artistic collection capable of explaining the role of Jews in the city's history and the splendor of their cultural legacy, which has survived to the present day. 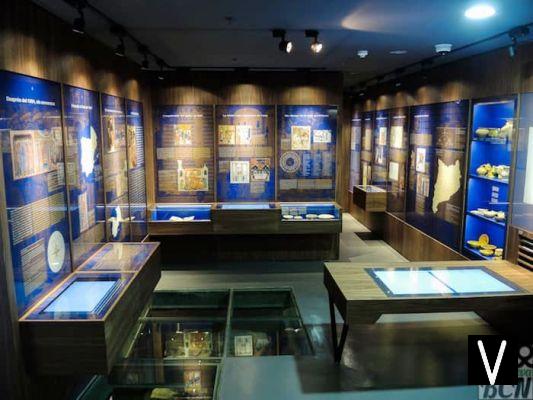 The temple of Augustus

Located between the Cathedral of Santa Eulalia and Plaça del Rei, the remains of the ancient temple of Augustus probably formed the central part of the forum. Collapsed over time, three columns were discovered in the 1956th century, which were repositioned. A fourth column was on display in Plaça del Rei, and was joined to the others in XNUMX. It is probable that the construction of the temple dates back to the reign of Tiberius, who instituted the cult of Augustus.

Antoni Gaudí, on behalf of Eusebi Güell, he designed a private urbanization that became one of the best public spaces in the city, the Parc Güell. The concierge (in Catalan Casa del Guarda), located in the entrance to the joint, was the private house conceived and designed by Gaudí as the house of the janitor. The house is now used to exhibit an educational path on Güell, Gaudí and Barcelona, ​​to explain Barcelona during modernism.

The Roman sepulchral street is located in the current Plaça de la Vila de Madrid, and corresponds to a secondary access to the ancient Barcino, with several tombs dated between the 1588st and 40rd centuries AD, With the development of the medieval city, on the same place the convent of the Discalced Carmelites was built in 900. Severely damaged by nationalist bombings during the Spanish Civil War, the convent was moved in the XNUMXs. During the remodeling of the square it was possible to discover the remains of this necropolis, now usable together with the nearby educational center, where it is possible to see the objects found in the archaeological site, with explanations regarding the structure of the Roman Barcino.

The MUHBA headquarters is located in Plaça del Rei, in the Barri Gòtic (metro Jaume I, line 4, buses 120, V17 and 45, or the red line of the Bus Turístic). The centers of El Call, the temple of Augustus and the Roman sepulchral street can be reached in a few minutes on foot from Plaça del Rei. Park Güell can be reached by metro, at Lesseps or Vallcarca stops (both on line 3), with the Bus turístic (green line, parc Güell stop), or the Barcelona city tour (blue line, parc Güell stop). The Centro Oliva Artés is located at Carrer de l'Espronceda, 142, reachable by metro from Selva de Mar (line 4) or Glories (line 1) stations.

All MUHBA facilities, with the exception of MUHBA Park Güell, are closed on January 24st, May 25st, June XNUMXth and December XNUMXth.
Access to some of the facilities that are part of the MUHBA, such as refuge 307, the Domus of Sant Honorat, the Domus d'Avinyó and the Casa dell'Aigua, are only possible for groups who have made a reservation in advance.

The ticket for admission to all MUHBA venues is unique: costs 7 euro (discounted if purchased online) for adults, reduced to 5 euros for children under 29 and over 65. Every Sunday, starting from 15:00 pm, admission to each location is free, with the exception of MUHBA Park Güell, consisting of the porter's house. On the first Sunday of the month, admission is free throughout the day, with the exception of Refugi 307 and MUHBA Park Güell. Barcelona Card holders and children under 16 are entitled to free admission. By showing the Park Güell ticket you are entitled to a 50% discount on admission.

add a comment of The Barcelona History Museum (MUHBA)