The Colonia Güell and the Gaudí Crypt 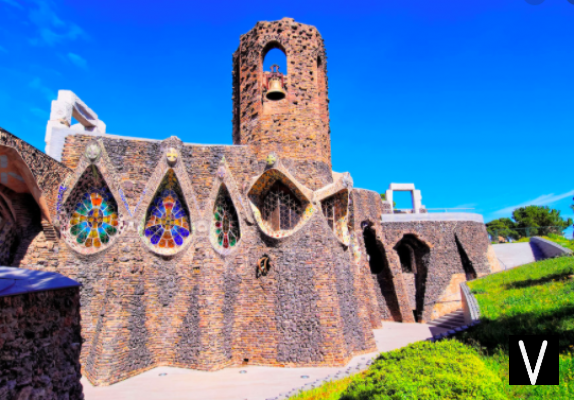 An entire industrial colony in a modernist style: the Colonia Güell. The Colony is the result of an ambitious project to build a utopian city, where the owner of the factory, in this case Eusebi Güell, provided his workers with state-of-the-art homes and facilities, in the name of social peace. The result is a village of about 800 people, with several public buildings of modernist architecture, the most important of which is the Crypt Gaudí, recognized in 2005 as a UNESCO World Heritage Site, for its importance in the history of architecture.

The development of the colony was started in 1890 on the initiative of the entrepreneur Eusebi Güell in a large piece of land near Santa Coloma de Cervelló, a few kilometers from Barcelona. The basic idea was to get away from social conflicts in the city, building an independent urban nucleus, with a social and economic life protected by the company. Colonia Güell was one of the first in Catalonia to provide social improvements for the workers, including several buildings of social utility in the plan.

The development of the Colony came to a real halt with the outbreak of the Spanish Civil War, when it was collectivized and managed by the workers. After the war, the property was returned to the Güell family, to be sold shortly after, in 1945, to the Bertrand i Serra family. In the following years, the Colony continued industrial production until 1973, when the factory was closed due to the crisis in the textile sector. In the following years the property was sold to various buyers: the factory was divided into lots to different companies, the houses to the inhabitants and the social structures to various public institutions. The recovery of the Colony began after it was declared a Cultural Interest in 1990, and then organized a sightseeing service in 2002.

What to see in Colonia Güell: the Gaudí crypt

The importance of the crypt of Colonia Güell in the history of architecture is due to the fact that for the first time Gaudí used all of his stylistic innovations in a unified way, subsequently employed in the Sagrada Familia: as Gaudí himself said, the church represented for him a monumental scale model of the Sagrada Familia.

The Cologne church project was commissioned by Eusebi Güell to Antoni Gaudí in 1898, who began a series of completed studies with the presentation of a model of the church. The actual construction of the temple began in 1908: the very ambitious project involved the construction of two naves, lower and upper, surrounded by several lateral towers and culminating with a central tower 40 meters high.

The interruption of the works was due to the death of the client: the Güell heirs let Gaudí know that they would not bear the costs of the remaining part of the church, only the works were completed in the lower nave which was then blessed in 1915, and then known as crypt. Although incomplete, Gaudí's crypt represents one of the Catalan architect's greatest works, and was declared a UNESCO World Heritage Site in July 2005.

In the crypt you can see for the first time the extensive use of catenary arches, able to make the interior space more fluid and dynamic and make the building easier to integrate with the surrounding environment, adapting the heights of the naves to the degree of slope of the hill. All these solutions respond to the desire for synthesis between architectural design, construction techniques and architectural forms, enriched by the great domination of Gaudí in the applied arts. If you are visiting Barcelona for the first time and have not yet seen the Sagrada Familia, then take a trip to the Colonia Güell first, it is absolutely worth it.

Other buildings of the Colonia Güell

Visiting the Colony you can see several buildings of architectural interest, mostly created during the modernist period: among the many, to note Ca l'Espinal, the work of Rubió i Bellver, and intended as the residence of the administrator of the Colony, Ca l'Ordal, built inspired by the ancient houses of the local farmers, the masias.

The whole complex can be visited in a couple of hours, add just over an hour to get to and from Plaça de Espanya.

How to get to Colonia Güell

Colonia Güell is located in Santa Coloma de Cervelló, just outside Barcelona. The quickest way to get to Colonia Güell is by light rail from Plaça de Espanya: from here you can take a lineq of your choice between lines S4, S8 and S33, to get off at Colonia Güell station, after about 20 minutes. travel. The first train to Cologne is at 5:00 in the morning, the last one returns to the city at 23:54. Trains depart every 20 minutes, the timetable is available on the FGC website. The ticket costs € 3.

Opening hours of the Crypt Güell

Admission costs € 7, reduced to € 5,5 for under 18s, over 65s and students. For the audio guide it costs 2 € additional. Guided tours are only in Castilian (Saturday at 12:00) and Catalan (Sunday at 12:00): they cost € 2,5 more than the entrance ticket. Those who own the Barcelona Card and the Bus Turístic discount booklet are entitled to a 20% discount on the admission price.

add a comment of The Colonia Güell and the Gaudí Crypt