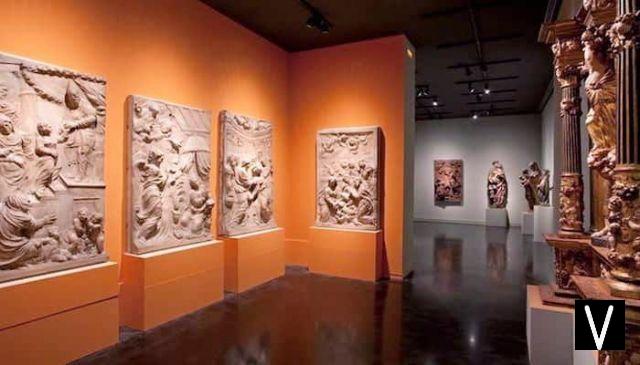 Fruit of the tireless work of its founder, the sculptor Frederic Marès, the museum that bears his name collects both an important sculpture collection and an extensive section of everyday objects from the XNUMXth century, the result of a legacy from private collections. Frederic Marès converted sculpture into something more than an artistic vocation, and during his life he collected an extensive collection of Hispanic sculpture, from antiquity to the XNUMXth century, which forms the most homogeneous section of the museum. Marès also donated part of the works resulting from his work as a sculptor, exhibited in the study-library. In addition to sculpture, the museum has tens of thousands of objects collected by its founder, the collector's cabinet, able to form a real collection of collections: fans, pipes, watches, jewels, photographs, games, keys, pharmaceutical bottles, for most of the nineteenth century, able to provide an interesting insight into the daily life of epoch.

The City of Barcelona, ​​following the wishes of Marès, agreed to the establishment of a museum in the Barri Gótic, opened in 1946. The initial donation is only the first by Marès, who has worked over the years to expand the collection of the museum, also enriched by other private donations, resulting in a progressive expansion of the structure. As the seat of the museum, a part of the buildings of Royal Palace, the center of power of the counts of Barcelona and the kings of the Catalan-Aragonese crown during the medieval period. The progressive restoration of the buildings made it possible to provide the museum with a particular environment, located in an absolutely privileged position. To access the building you have to go through the patio of the Palacio Reial, from Plaça de la Lu, next to the Cathedral. The patio, shaded by orange trees, is one of the most beautiful in Barcelona, ​​and is worth a visit on its own. During the summer months, a bar, the Summer Coffee, where you can stop for a beer. You can find more detailed information in this article.


The sculpture collection of the Marès Museum

On the ground floor of the main building is exhibited the section of ancient and medieval sculpture up to the fifteenth century, among the numerous works present it is worth mentioning the relief in Romanesque style of the apparition of Jesus to his disciples in the sea, attributed to the master de Cabestany and coming from the Benedictine monastery of Sant Pere, in Rhodes. The first floor instead houses the sculpture from the fifteenth to the nineteenth century, with an excellent section of Renaissance and Castilian Baroque art, with examples of all the main Spanish sculptural schools. In addition to sculpture, there are also other forms of artistic expression, such as jewelery, cabinet making and above all painting, with an interesting collection of medieval paintings on wood.

The Coleccionista's Gabinete allows you to visit a completely different section from that of sculpture, without having to leave the building. Distributed along 17 thematic rooms containing all sorts of curiosities and antiquities, they allow you to observe a reflection of the life and habits of the past, especially the nineteenth century. The name of the rooms and their distribution is that originally given by Marès.

This space collects a joint of sculptural works by Frederic Marès in his library and personal studio chosen by the sculptor to show his works to the public. Opened in 1996, it is located on the second floor of the museum, and collects in addition to the works also a series of personal objects of Marès.

How to get to Frederic Marès

The Marés museum is located in Plaça de la Lu, at number 5, in the Barri Gótic, a few steps from the Barcelona Cathedral. It can be reached by metro from Jaume I stations (yellow line 4), or from Liceo station (green line 3), on the Ramblas. With the turístic bus you can get off at the Barrio Gótico red line stop.

The cost of the general ticket is 4,20€. The reduced ticket costs € 2,40, young people between 16 and 29 and seniors over 65 are entitled to it. Holders of the bus touristic booklet pay € 3,40 instead. On the other hand, children under 16 and holders of the Barcelona Card can enter for free. Audio guides are available in English, Spanish and French, the rental cost is € 1. Admission is free for everyone every first Sunday of the month, for the whole day, and the other Sundays starting at 15:00. On certain days of the year the museum opens its doors for free: on February 12 (Santa Eulalia), May 18 (international museum day), and for La Mercé, September 24.

Audio Video The Frederic Marès Museum
December 2021 in Barcelona: hot even when it's cold! ❯